PRAJ (Provisional Release Association in Japan): Who We Are
in English
日本語(漢字かなまじり)
にほんご(ひらがな・カタカナ)

In Ibaraki, although three inmates fallen down with shocking of earthquake(15 o'clock in March 11), officials locked them in jail in their room from open space, only repeated "Don't worry" and never opened until Inmates all beaten doors with scream.
The situation is same in Tokyo. In Tokyo, we don’t know if inmates had injury or not, but inmates all say they quite feared the earthquake. Tokyo Regional Immigration Bureau stands on reclaimed ground, and because inmate's rooms are on 8-11 floors, it is difficult for them to escape when it comes to. These are sources of anxiety for inmates.
But, officials ordered them to go back to rooms and allowed not to escape. Of course many inmates protested, but officials locked them in jail at 15-16 o’clock. Besides, in some Block, staffs don't even accounted about the earthquake.

Immigration Bureau chose the worst one of all possibility to be able to take. They had to have inmates refuge at that time, but they bothered to block the route. Inmates will have had stress to shut into the room in crisis. It is obvious for us to difficultly help inmates from l o c k e d rooms, when it happens to the building collapsed.
Immigration Bureau has not let inmates go out even free space yet, without very short time, called “Free Time”(as of March 18).
If Immigration Bureau regarded to foreigner's safety and human rights, they could never have do so. Immigration Bureau must concern to only control foreigners.
Inmates worried not only their own bodies, but also whole society and people in these islands. They have already known terrible damage in Tohoku and Kanto on the earthquake, and the accident of the nuclear power plant in Fukshima. They can look down the long line of foreigners that want escape Japan. They worried their friends and families very much, who have lived near disaster areas.
But Immigration Bureau limited them to call their fammilies, besides in some blocks, they reject inmate's demand on calling.

We made a petition to alter Immigration Bureau's behavior that brings inmates anxiety and risk, to Tokyo Regional Immigration Bureau and Higashi-Nihon Immigration Center.
We discussed with Y(initial) who is a chief of visiting inmates.
We asked him “Do you have the plan and training grounded on Treatment Regulation 16?”
He answered “Yes, we have the manual and training.”
We asked” If so, why did you lock foreign inmates in jail? according to manual？”
He said” I can not answer, secret.” And he has never opened the manual.
But we can not have anything but interpretation that they locked inmates in jail according to manual when the earthquake occurred. Because Y admits that they have the manual for crisis, and in fact, Immigration Bureau's acting on earthquake, according to the manual, is to lock.

Northeast Pacific Earthquake on the 11th of this month and the after situation brought the catastrophe, that is to say extremely big damage to Japan. It seems that you also spent the weekend with confusion and are still busy in providing against the post progress.
The provisionally released people in Kansai and the others organized the PRAJ last September, and we, in Kanto organized PRAJ last October. After that, we call twice on Minister of Justice and the Director of Immigration Bureau after Ministry of Justice, the Director of Tokyo Immigration Bureau to invest provisionally released people with status of residences and to stop re-committing for the outcome of the Procedure for Recognition of Refugee Status or administrative litigation. This is our first application for Higashi-Nihon Center. We were primarily going to call on you to grant soon permissions to longtime inmates, seriously ill patients, minor and so on, and to permit meetings with up to three rooms and five inmate at same time as past situation to us, and condition of meetings like Japanese or regular residents to provisionally released people.
Since your situation and ours are difference, it must be that some conflicts will be occurred. However we must think well about friends in the center than outside. We earnestly request you of an appropriate rise rather than past offer.
We are in difficult situation including some aftershocks on Pacific side of East Japan and linked many earthquakes everywhere, accident in Fukusima atomic power plant. Nevertheless they are restraint, and their safety and life are entrusted to you. We ask you for below urgent proposal with demands for protecting and taking into consideration them, and affording the most facility to them, who is in emergency. 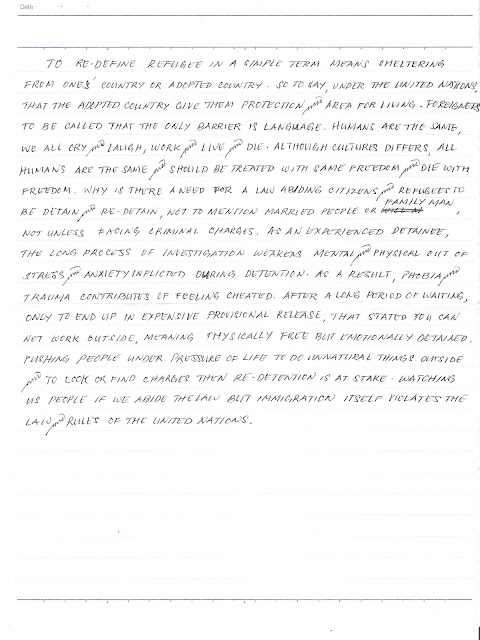 To re-define refugee in a simple term means sheltering from ones' country or adopted country. So to say, under the United Nations, that the adopted country give them protection and area for living. Foreigners to be called that the only barrier is language. Humans are the same, we all cry and laugh, work and live and die. Although cultures differs, all humans are the same and should be treated with same and die with freedom. Why is there a need for a law abiding citizens and refugees to be detain and re-detain, not to mention married people or family man, not unless facing criminal charges. As an experienced detainee, the long prosess of investigation weakens mental and physical out of stress and anxiety inflicted during detention. As a result, phobia and trauma contributes of feeling cheated. After a long period of waiting, only to end up in expensive provisional release, that stated you can not work outside, meaning physically free but emotionally detained. Pushing people under pressure of life to do unnatural things outside and to look or find charges then re-detention is at stake. Watching us people if we abide the law but immigration itself violates the law and rules of the United Nations. 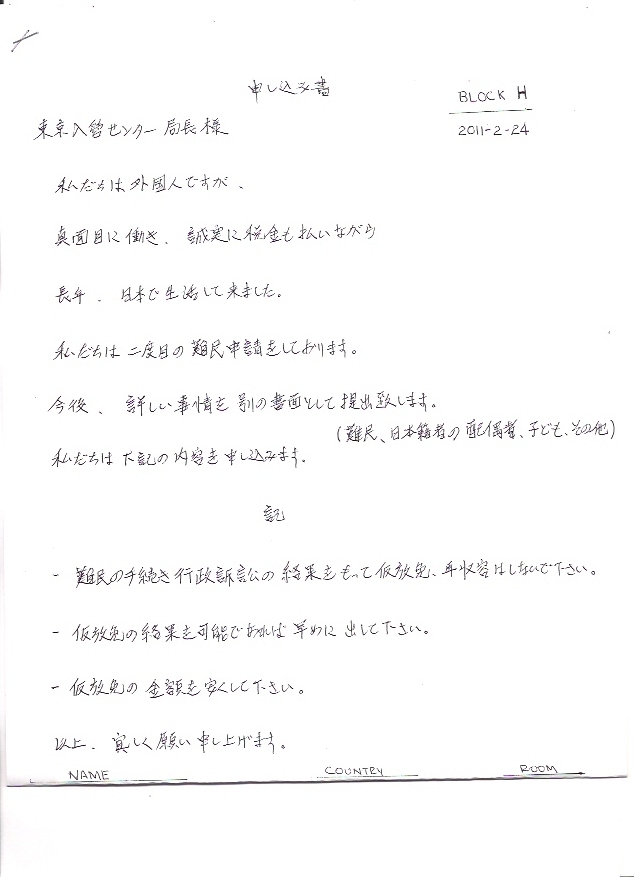 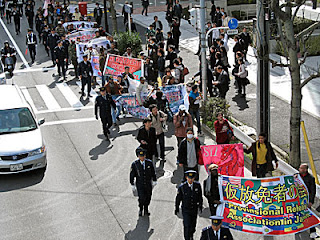 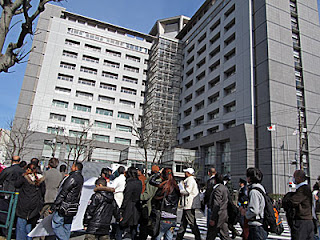 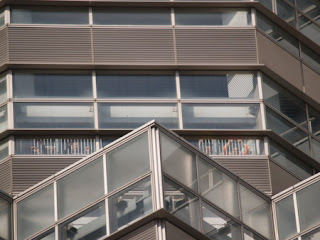 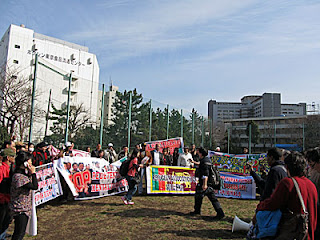 
We, Provisional Release Association in Japan, are a group of "provisionally released" foreigners organized on 31 October, 2010. And on 28 December, we requested you: 1. to give proper legal status, such like refugee recognition or special permission for residence, to all "provisionally released"; 2. to stop re-detention of them.
Immigration Bureau of Japan, however, still continues to detain us, "provisionally released" again and again although our physical and mental health is seriously harmed during the first period of detention. Some of us are even detained only a few months after released.
As you know, many migrant workers have left Japan so-called "Lehman-shock" in 2008 because of the decrease in employment. But those who still remains in Japan have fatal reasons. Some have a family in Japan, some seek asylum from persecution in their homelands. Above all, we, "provisionally released" have dared to endure long detention, pressure to make us leave Japan, and condition of provisional release which restricts our right and freedom in various aspects of our everyday life. We would have gone to our homelands if we could have done so.
Last year, a refugee from Pakistan went mad and submit to going home during re-detention, which means that you achieved your purpose of it. His family in his homeland have never made a contact since he left Japan. We wish for his safety. If it gets clear that he is persecuted in Pakistan, Immigration Bureau of Japan is responsible for that.
On the other hand, since the protest of detainees in local detention centers last year, we can find that the number of provisional release has increased, that the ammount of deposit of provisional release has decreased, and that Immigration Bureau announces its policy to avoid long-term detention and atcually makes efforts to do so through, for example, the consultation with Japan Federation of Bar Association. We take all of these as hopeful signals.
Please reconsider more on human right of "provisionally released" and stop re-detention of all of them. We believe this is the way Japan can show itself as humanitarian country.

PRAJ (Provisional Release Association in Japan)
Posted by PRAJ at 2:36 AM No comments: